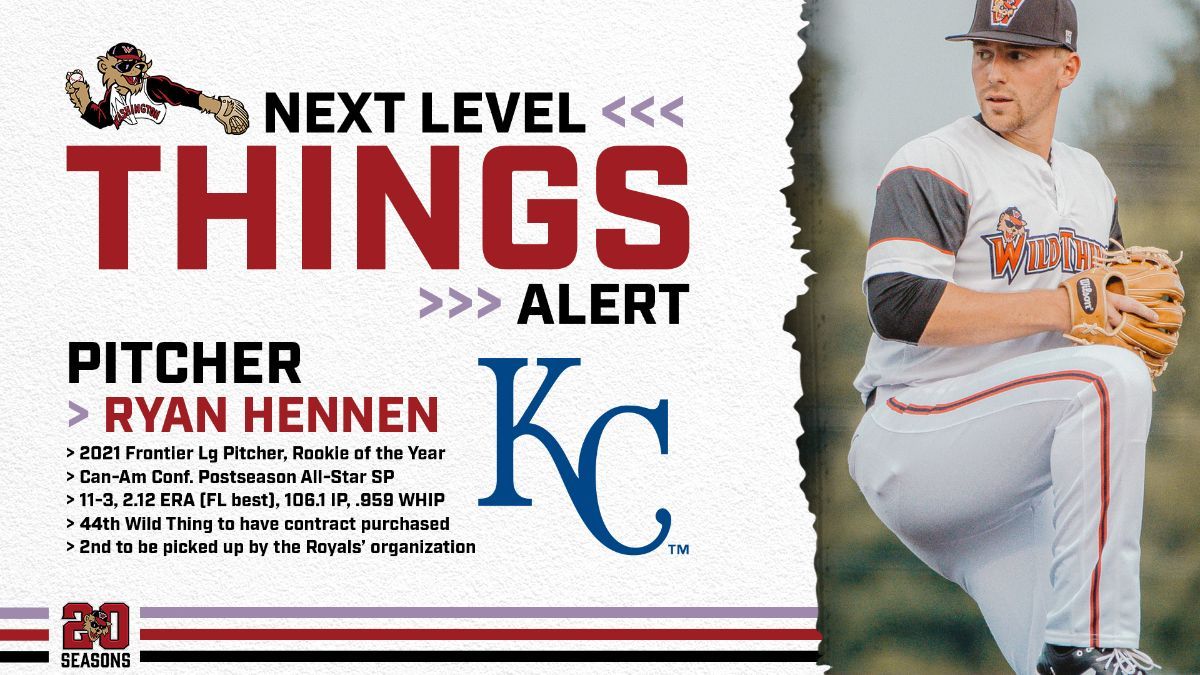 WASHINGTON, Pa. (April 5) – For the 45th time in franchise history, the Washington Wild Things have sent a player to affiliated ball by way of a contract being purchased. Left-handed pitcher Ryan Hennen, the 2021 Frontier League Pitcher and Rookie of the Year, is headed to the Kansas City Royals organization.

“It’s about time! [We] couldn’t be happier that Ryan is finally getting this opportunity. No doubt it is well deserved,” said manager Tom Vaeth. “That kid came in here, worked his butt off and had a monster year for us. It’s great, not only for our organization, our clubhouse and our fans, but also for the league when the reigning pitcher and rookie of the year is recognized for his accomplishments by getting a chance to further his career with an MLB organization.”

“Kansas City is really high on Ryan and I think this will be a great fit for him,” Vaeth continued. “If he continues to pitch to his abilities, I really believe we will be watching him pitch on television one day.”

The southpaw raked in three major awards in 2021, with the top honor being named 2021's Brian Tollberg Award winner for the Frontier League's Pitcher of the Year. His 2.12 ERA led the league by 0.60, his 11 wins were tied for second in the league and his innings (106.1) were the 10th most total in the league. He became the fourth Wild Thing and third left-handed pitcher to win Pitcher of the Year, as he joined Frontier League Hall of Famers Jared Howton (2002) and Aaron Ledbetter (2007) as well as lefty Thomas Dorminy (2018) in that company.

The southpaw also took home the second Wild Things' Jason Simontacchi Award for Rookie of the Year, joining Casey Barnes (2011) as winners of that award in the organization's history. Hennen was also the lone Wild Thing on the 2021 Can-Am Conference Post-Season All Star Team as the team's starting pitcher. Howton (2002), Ledbetter (2007), Trevor Foss (2016) and Dorminy (2018) have also been honored as Post-Season All-Star Starting Pitchers.

“I just want to say thank you to everyone involved with the Wild Things’ organization, from the front office and coaches to my teammates,” said Hennen. “I’m thankful and beyond excited to be joining the Kansas City Royals organization.”

Ryan becomes the second player to be picked up by the Royals from the Wild Things, joining Jacob Condra-Bogan, who had his contract purchased following the 2017 season.

The Washington Wild Things wish Hennen the best of luck in the next step of his journey and career.

The Wild Things will kick off their 20th Frontier League season May 13 at home against the New York Boulders. The full schedule is available at washingtonwildthings.com. Tickets are available now at wildthingstickets.com.