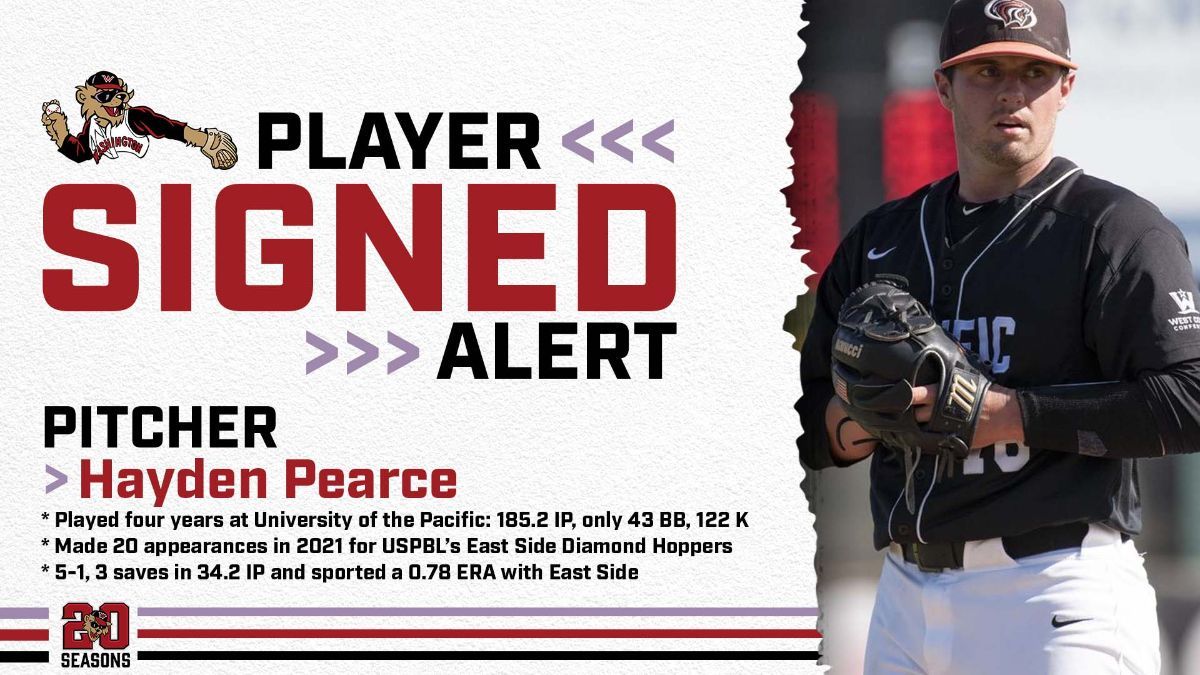 WASHINGTON, Pa. (Jan. 7) - Today the Wild Things announced the signing of right-handed pitcher Hayden Pearce, who played four seasons at University of the Pacific before making the jump to pro ball in the United Shore Professional Baseball League (USPBL) in 2021. Pearce will have rookie status intact entering the 2022 campaign.

After being a starter most of his collegiate career, Pearce appeared in 20 games from the bullpen for the East Side Diamond Hoppers of the USPBL. He logged 34.2 innings and sported a 5-1 record with three saves. In that work Pearce allowed just 21 hits, six runs (three earned), walked six and fanned 42. That works its way out to a 0.78 ERA.

"[I'm] happy that [Hayden] will be joining us for camp. He comes in with a reputation of being a strike thrower: someone who can fill up the zone," said manager Tom Vaeth. "He will be one of a handful of guys that will be vying for a spot at the back end of our rotation."

President and General Manager Tony Buccilli said they were impressed with Pearce's transition to pro ball and his ability to produce following a full college season.

"He gained some experience in different roles and that versatility is always beneficial for a contributing rookie," said Buccilli. "Hayden fits our mold. He challenges hitters and takes pride in working efficiently."

Before his time at University of the Pacific, Pearce was named Second Team All-Palomares League in 2015 at Glendora High School (California) after sporting a 1.66 ERA in 33.2 innings of work. He earned Palomares League MVP and First Team All-CIF as a senior in 2017 with a 1.24 ERA (third in the league) and 55 strikeouts while tying for the league high with nine wins.

"I had an awesome college career in the West Coast Conference at University of the Pacific. The high level of competition prepared me for the next step after college baseball," said Pearce. "The USPBL was something different for me as I ended up becoming a reliever/closer for the Hoppers. I performed above expectations and won reliever of the year for the USPBL."

He said he fits the mold as being reliable and a competitor.

"I believe I’ve been able to prove my versatility as a pitcher and have shown that I can be relied on and will go out and compete even in my worst days," said Pearce.

Pearce said seeing what Vaeth has done in his short time with Washington was a big factor in his decision to sign.

"It's an opportunity I couldn't pass and I'm beyond excited to get there and contribute any way I can, meet new people and have some fun," said Pearce. "[Some] personal goals would be becoming a student of the game and picking the brains of my coaches and teammates, and to go out and just have fun. This is a beautiful game so why not have some fun with it?"