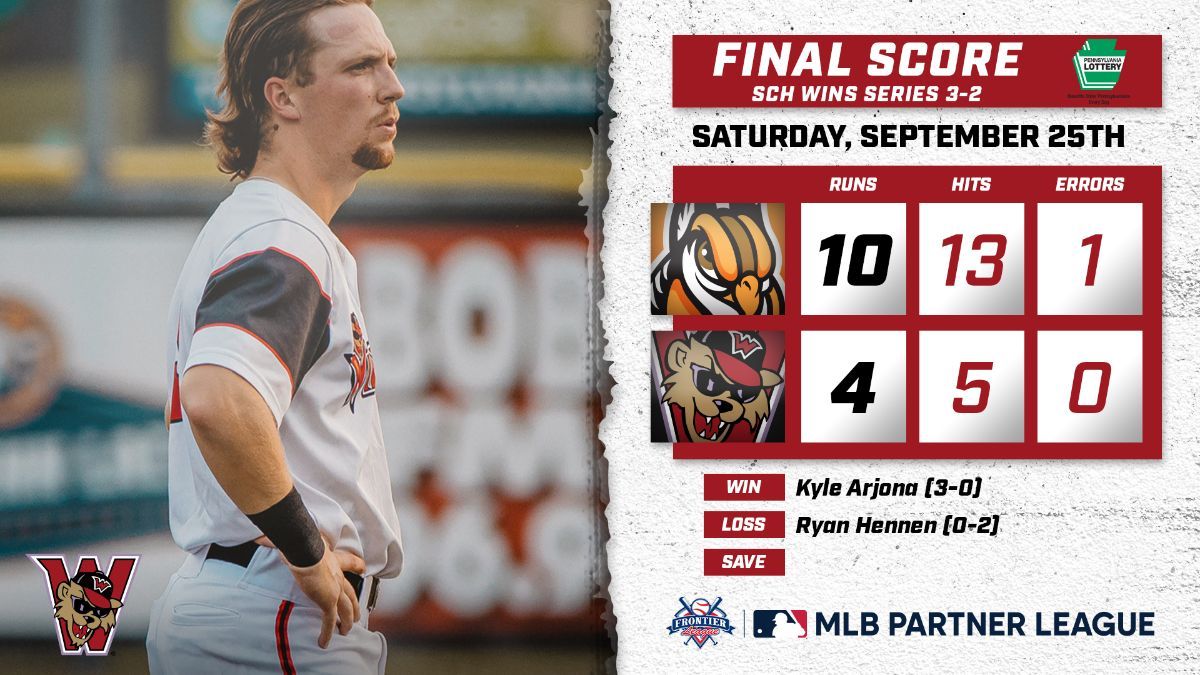 WASHINGTON, Pa. (Sept. 26) - Schaumburg took an early lead in Game 5 of the Frontier League Championship Series and added without looking back, as they raced to their fourth championship in team history, taking the winner-take-all contest by a final of 10-4.

Schaumburg got the scoring started in the decisive contest quickly when Matt Bottcher hit a three-run homer to score Quincy Nieporte and Braxton Davidson. Washington responded lightly with a run in the bottom half. Nick Ward led the frame off with a base hit to left and two batters later scored on a sac fly by Scotty Dubrule to make it 3-1.

The Boomers took the run right back in the top of the second with a sac fly by Alec Craig to score Matt McGarry, who had doubled with one out. That made it 4-1 Schaumburg and turned out to be one of the final batters Ryan Hennen faced in his final start of the season. Hennen was lifted after two innings. He allowed five hits and four runs. Daren Osby came on for him and put up a zero despite a Clint Hardy double in the third.

The success didn't last as Schaumburg plated four on three separate home runs in the fourth against Osby, as the Boomers continued to swing it well. Nick Oddo hit an opposite-field home run to lead off the frame before Nieporte and Davidson went back-to-back later in the inning to make it 8-1. Nieporte's homer was a two-run home run.

Jesus Balaguer tossed two scoreless inning in the fifth and sixth but Washington wasn't able to fight any closer. Keven Pimentel came on after that in the seventh and put up a zero. Kevin McNorton was tagged for two runs on a two-RBI fly ball for Nieporte in the eighth.

In what was Zach Strecker's likely final career appearance, the all-time Frontier League saves king worked a one-two-three ninth inning with a punchout and walked off to a strong ovation from the Washington faithful and got a curtain call.

Washington plated three in the ninth on a sac fly by Grant Heyman, an RBI single from Andrew Sohn and an error on a batted ball by Andrew Czech.

Kyle Arjona, who was named the Frontier League Championship Series' MVP, went the distance and recorded the final out with a fielder's choice.

The Wild Things' clubhouse, players, staff and front office would like to thank fans for their continued support throughout the season. Information on season tickets for the 2022 season will be made available in the coming weeks at washingtonwildthings.com and on the team's social media platforms.