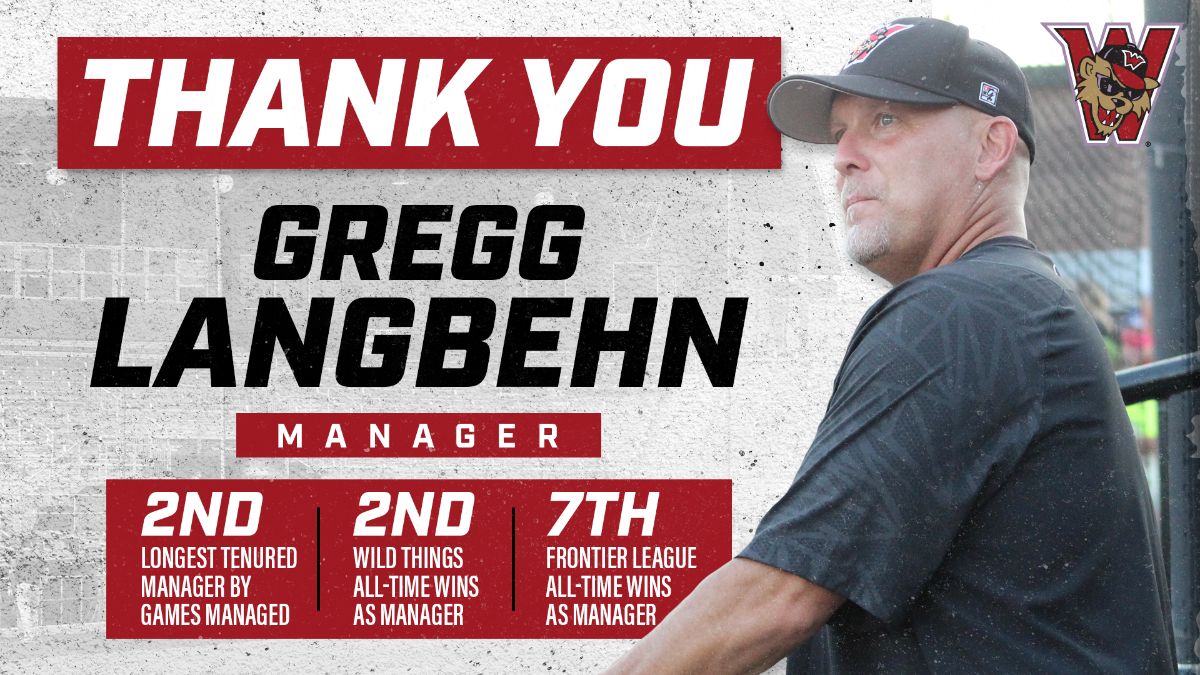 WASHINGTON, Pa. (January 4) - The Wild Things announced today that manager Gregg Langbehn has decided to retire from professional baseball, which completes his tenure with the team that began in 2016. Langbehn retires as the second-most tenured manager in organization history by games managed and second winningest manager in team history behind John Massarelli.

Langbehn helped to bring stability to the position that the Wild Things were not familiar with after Massarelli's tenure came to an end following the 2007 season. The team had run through six managers in the previous nine years and a manager-by-committee for part of 2014 before hiring Langbehn. His tenure included an East Division Championship (2018), a Frontier League Championship Series appearance (2018) and two total playoff appearances, with the other coming in 2017. Under his guidance, he managed an MVP (James Harris, 2018), a Pitcher of the Year (Thomas Dorminy, 2018) a Citizenship Award winner (Rashad Brown, 2017), 21 All Stars and saw eight of his players' contracts purchased.

Now the Wisconsin native and resident heads home after nine seasons as a Frontier League manager, five years spent managing in the Houston Astros' farm system and two seasons as the Video Replay Coordinator for the Cleveland Indians, all of which followed eight seasons spent playing in the minors.

“It was a great run working with Gregg and getting to know his family. He played such a pivotal role creating a culture, holding players accountable and bringing the stability we strived for. We appreciate his efforts over the years and know stepping away was not an easy decision for him.”

Langbehn's 190 wins in a Wild Things' uniform are the second most in team history, while his 457 wins, between the four years with the Wild Things and five with the Traverse City Beach Bums (2009-13), rank him seventh all time in Frontier League history. New Ottawa and former manager in River City Steve Brook would have been what Langbehn was chasing for sixth on the charts. Langbehn was named Frontier League Manager of the Year in 2012 while managing the Beach Bums to a 64-32 record.

Langbehn shared the following statement on his retirement, thanking the Wild Things' organization and fans:

“I want to thank the Wild Things ownership group, everyone in the front office, game day workers, the fans and host families for five fantastic seasons. Additionally, I would like to thank Train, the greatest bus driver in the history of professional baseball. Retiring is never easy, however, after 30 years in pro ball, I will be staying home with my family full time to have the opportunity to watch my kids grow up before they head off to college. Furthermore, thank you to my awesome wife Shelly. She is the backbone of our family and makes sure the kids are always taken care of and gets them to the places they need to be at the appropriate time. Finally, thanks to all of my friends, family, former teammates, coaches, colleagues, managers and the Frontier League. Your help and support throughout the years always guided me in the right direction. Best wishes to everyone and once again, thank you!"

The search for a new manager has been completed by the Wild Things. The new Washington field staff is expected to be announced Wednesday.