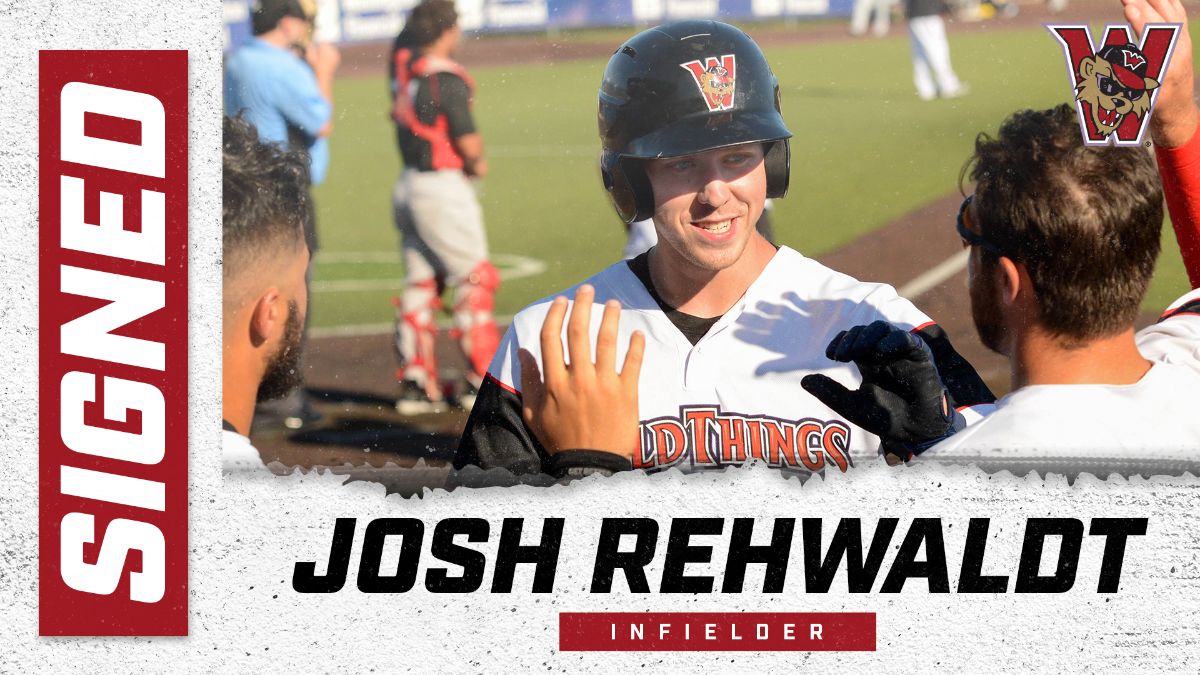 WASHINGTON, Pa. (November 19) – As the 2021 roster continues to take shape, the Washington Wild Things have signed infielder Josh Rehwaldt to a contract extension after acquiring him in November of 2019 from the Sioux Falls Canaries. Rehwaldt was the leading hitter for the Wild Things during pod play this past summer.

With a .309 batting average two doubles, four home runs and eight RBI, Rehwaldt paced the Wild Things’ offense in some facets, including in walks with a team-high 15. His on-base percentage of .451 was also the team’s best in the 17 games he played in for Washington during pod play.

Rehwaldt had been acquired on November 19, 2019 from Sioux Falls for future considerations, so he will look to make an impact in his first Frontier League season in 2021.

“There is immense upside with Josh and his offensive game. He has a very unique skillset at his size, which we saw flashes of this past summer,” said president and general manager Tony Buccilli. “We have challenged him to take that next step as a professional hitter, build around consistency and become a force situationally. Adding another contributing run producer will be key in our success in 2021.”

Rehwaldt said he was excited for the opportunity to keep playing.

“I wanted to continue my baseball career. After hearing the Wild Things wanted me back it didn’t take a lot of time to think over,” said Rehwaldt. “I was excited to not only get another opportunity but also to play for the organization. Being at the field [was the best part]. The fans, great teammates and staff made playing in Washington enjoyable last summer even though it was very brief.”

At Apple Valley High School (MN), he played baseball and football. He tossed back-to-back no hitters pitching on the JV team before hitting .403 in 2013 for varsity.

The left-handed slugger started and completed his collegiate career at the University of Sioux Falls (USF) and was a four-year contributor. His batting average was not, for a season, lower than .337 and he sported an OPS of 1.000 or higher three of the four years he was at the Division II school.

As a freshman, Rehwaldt made 48 starts and recorded a .367 batting average. He drove in 41 with four home runs, 17 doubles and a triple, and had 21 multi-hit games to go along with 10 multi-RBI games. In six games that year, he drove in three or more.

The success continued as a sophomore, as he was selected as USF’s first ever NCAA DII All-Region player (NCBWA) and the efforts earned him first-team All-NSIC laurels at first base as well. He had a career-best 16-game hitting streak that season, had 26 multi-hit games and was top 10 in nine NSIC hitting categories. Rehwaldt hit six home runs, had 17 doubles and four triples to go along with a slash line .379/.434/.600. He had a career-best 49 RBI that season.

In all, he was a two-time All-NSIC selection and finished his Cougars’ career ranked first in 17 categories for a career. That led to the start of his pro career with the Canaries in the American Association in 2019. There, Rehwaldt clubbed two homers and drove in 14 in 29 games.

The Burnsville, Minnesota, native said fans can expect him to show up ready to play every day.

“There’s nothing I love more than being able to show up to the ballpark and play in front of great fans,” said Rehwaldt. “Although the season may get long from playing every day and travel, I’ll never know when my last game will be and don’t want to waste one second of the opportunity I’ve been given.”

He said the main goal is to always win, but he’s got run production on his mind after a conversation with Buccilli.

“After talking with Tony, we believe my main goal should be to produce runs,” said Rehwaldt. “Whether that’s hitting a home run or a sac fly, [the goal is that] I can get baserunners in to score and help the team win.”

Rehwaldt is the 14th player announced for the 2021 roster and the eighth position player.