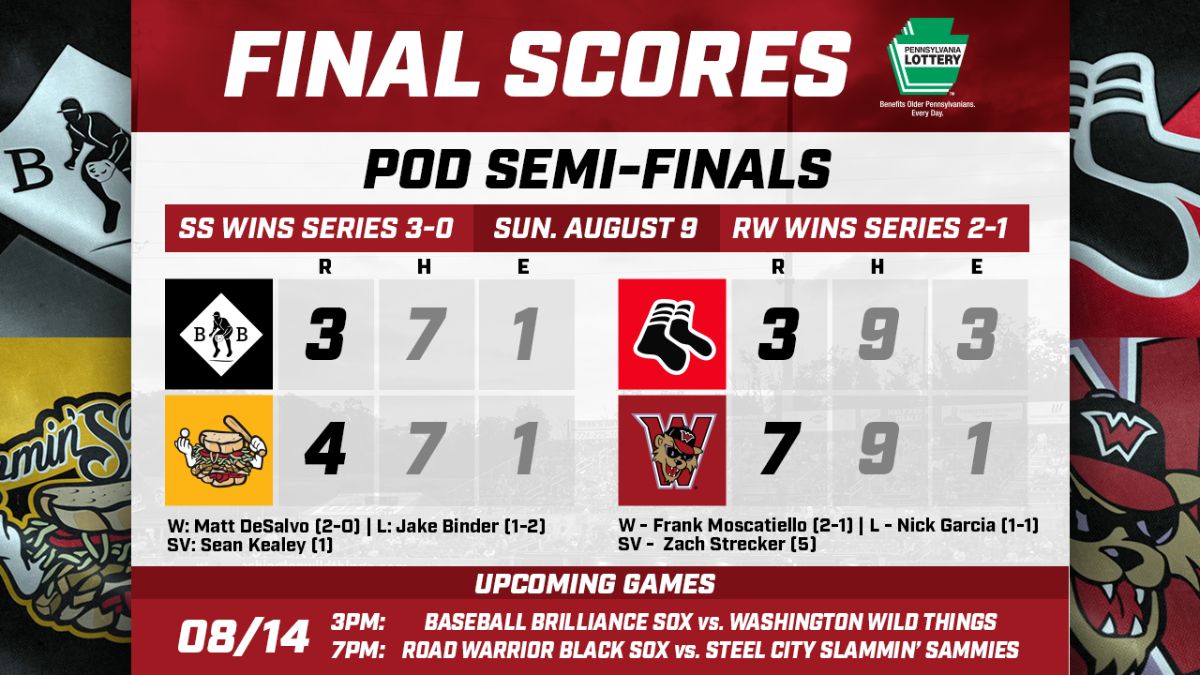 WASHINGTON, Pa. (August 9) - Sunday at Wild Things Park the Slammin' Sammies and Wild Things came away victorious in the finales of the series. Steel City won 4-3 over the Baseball Brilliance Sox and the Wild Things defeated the Road Warrior Black Sox 7-3.

Baseball Brilliance scored the first two runs of the game on a home run by Pete Yorgen, his first of the summer, in the first inning. The homer scored Mark Demko and the two runs were unearned against the line of starter Matt DeSalvo for the Slammin' Sammies, who got the win after six innings of work. He allowed five hits and the two unearned runs, struck out five and walked two.

Dalton Combs singled home the Slammin' Sammies first run in the home half of the first before giving Steel City a one-run lead in the third with a two-run single scoring Joe Campagna and John Sansone. Campagna also scored on the first one. Jason Shirley's single that brought home Russ Olive in the sixth ended up being the difference in the game, as Aaron Brill doubled home Levi Martinez in the eighth for the Sox.

Jake Binder took the loss, falling to 1-2, after seven innings of four-run ball. Three were earned. Sean Kealey picked up his first save with a clean ninth.

Rehwaldt led the fourth off with a home run, his fourth of the year and second of the weekend, before Chris Kwitzer singled home Cody Erickson and White to make it 5-1. Hernandez popped a pitch up in foul ground by the Wild Things dugout in his turn in the frame. Terrence Pinkston was at third and when home plate was not covered on the play, so he scampered home.

Drew Mount hit a homer in the seventh before Hernandez hit one of his own in the bottom half, his fifth of the summer. Carson McCurdy hit a pinch-hit RBI single in the ninth before Zach Strecker earned his fifth save of the season.

Information and game times for the championship and consolation series next week will be released tomorrow on the Wild Things' website and social media platforms. The Road Warrior Black Sox and Steel City Slammin' Sammies will meet for the title and the Wild Things meet the Baseball Brilliance Sox for third place.