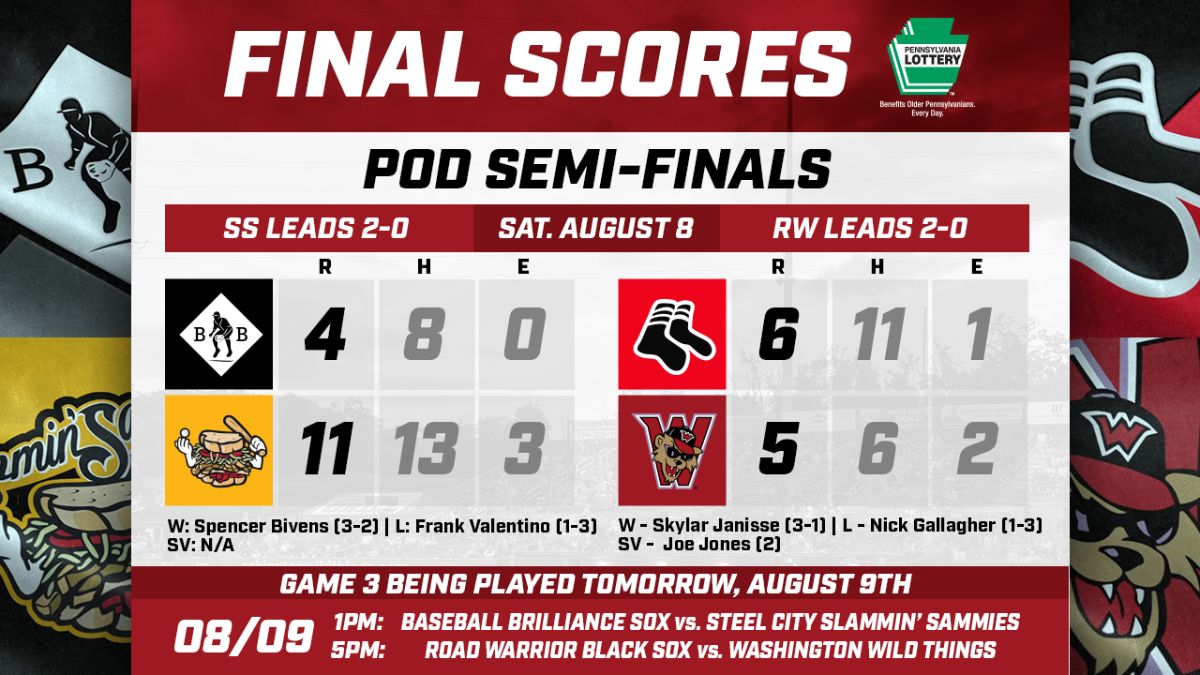 WASHINGTON, Pa. (August 8) - The championship series and consolation series matchups for the 2020 Summer Baseball Pod in Washington are set after Saturday's action at Wild Things Park, that saw the Slammin' Sammies win 11-4 over Baseball Brilliance and the Road Warrior Black Sox hang on against the Wild Things 6-5. Game three of each semifinal series will be played tomorrow at Wild Things Park.

Steel City got off to a quick start in game one of the day, as the Slammin' Sammies scored three runs in the bottom of the first. John Sansone doubled home Robbie Thorburn, Nick Ward doubled home Sansone and Liam Sabino plated Ward with a single. In the second, Baseball Brilliance got all three back. Cody Lovejoy doubled to score Nicco Toni, Andres Rios lifted a sacrifice fly to score Lovejoy and an error allowed Tommy Baggett to score and tie the game.

Saige Jenco immediately gave the Slammin' Sammies the lead back with a two-run shot in the second, his second home run of the year and in as many days. A Nicco Toni sac fly scored Brandon Phillips in the Baseball Brilliance third. That made it 5-4 before Steel City scored the next six runs. In the third, Dalton Combs hit a home run, his first of the summer. In the fifth, John Sansone hit a homer, his sixth of the year. In the sixth, Sansone lifted a sac fly, Combs singled home a run and Ward did the same. Robbie Thorburn had a sac fly of his own in the seventh.

After winning 16-5 in game one, it was the Road Warriors who opened the flood gates quickly. The Black Sox scored four runs in the second. Zane Gelphman doubled home a run to start the scoring before he and Carson McCurdy scored on a triple by Brett Smith. Derek Reddy plated a run with a single up the middle to make it 4-0. Gelphman's second RBI double of the night made it 5-0 in the third.

That's when the Wild Things started to chip away at the lead. Ray Hernandez and Josh Rehwaldt hit solo shots in the fourth to cut the deficit to three. The Road Warriors got a sac fly from McCurdy in the seventh before the Wild Things scored to make it 6-3 when Josh Rehwaldt scored on a passed ball in the home portion of the inning. Ray Hernandez grounded out to score a run in the eighth. Then Josh Rehwaldt plated Stewart Ijames with a double later in the inning. The Wild Things managed to get the tying and potential winning runs on base in the ninth, but couldn't complete the comeback.

So next week's matchups will be Baseball Brilliance and Washington for third place in the pod and Steel City and the Road Warriors for the title.

This weekend's series will continue tomorrow, with Steel City and Baseball Brilliance battling at 1 p.m. and the Wild Things and Black Sox at 5 p.m.