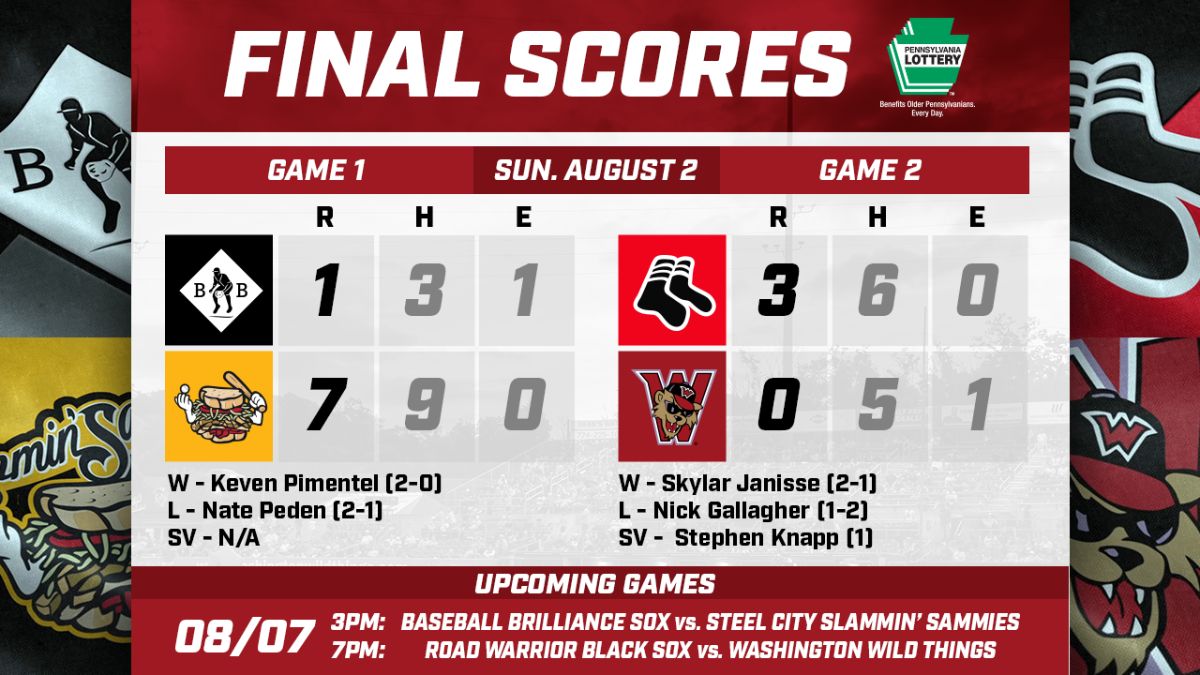 WASHINGTON, Pa. (August 2) - Sunday at Wild Things Park, the Steel City Slammin' Sammies defeated the Baseball Brilliance Sox going away a bit thanks to a power display, 7-1, and the Road Warriors shut out the Wild Things in the nightcap, 3-0.

The first game's scoring started in the fourth inning after each starter had put up at least three zeroes. Nate Peden allowed two to the Slammin' Sammies in the fourth inning. Joe Campagna hit his third home run of the summer, a solo shot, to start the frame before Liam Sabino lifted a sac fly to plate Dalton Combs, who had gone to third on a ground-rule double by Nick Ward.

In the sixth, Brennan Price hit a solo shot to plate the only Sox run of the game, his fifth of the year. In the bottom of the seventh, John Sansone hit a grand slam to make it 6-1. The grand slam was Sansone's second of the year and his fifth homer. Dom DeRenzo hit a solo shot off the left-field foul pole in the eighth to bring the game to its final of 7-1. Keven Pimentel picked up the win for Steel City after seven strong innings of one-run ball. He allowed three hits and struck out eight. Zach Reid and Logan Linder both worked scoreless innings in relief for Steel City.

Game two was a pitchers' duel. Nick Gallagher, the starter for the Wild Things, pitched four perfect innings before eventually allowing a run on a sac fly by Trey Bigford in the sixth after a lead-off triple. Skylar Janisse was solid too. He pitched seven shutout innings for the Black Sox, allowed four hits, fanned five and walked two, both of which came in the first inning.

Nick Crouse added a run with a base hit in the seventh before Drew Mount hit his first home run to run the score to its final of 3-0 in the eighth. Stephen Knapp worked two innings to get the save. Janisse picked up his second win. Gallagher took the loss. He threw six innings and fanned six while allowing just three hits and the one run.

Next week's schedule will be announced tomorrow afternoon and tickets will go on sale at that point as well.