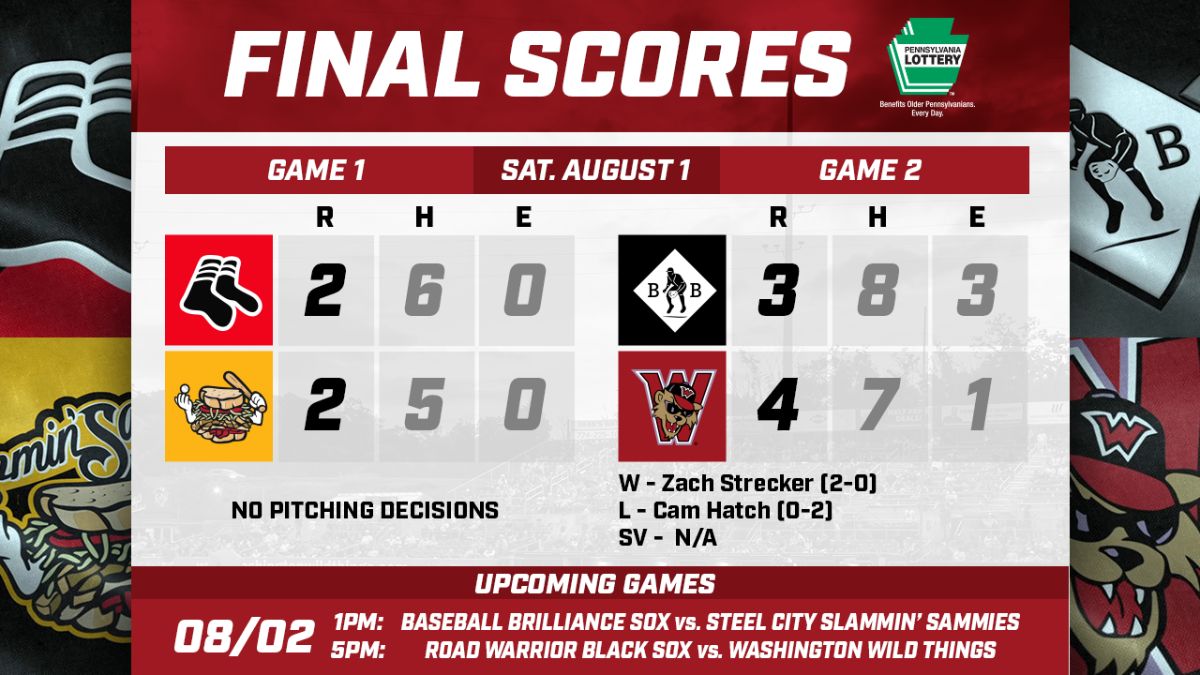 The scoring in the first game got going in the third when Dalton Combs lifted a sacrifice fly to plate Joe Campagna, who was hit by a pitch to start the inning. In the sixth, Saige Jenco walked with the bases loaded to make it 2-0 Steel City. Nate Pawelczyk had dazzled through six for the Slammin' Sammies. He had fanned eight and allowed just two hits. But the seventh brought trouble. Rob D'Angelis, the Black Sox designated hitter, hit a home run over the foul pole in right to make it 2-1 before the next batter, Nick Crouse, doubled. Nick Adgar was at the plate when Crouse scored on a Pawelczyk wild pitch.

He left the game after walking Adgar before Tommy Shirley managed to escape the inning with the tie in tact. Neither team scored the rest of the scheduled nine innings. That sent the game to extras for the first time in the pod. The pod is using a modified international tiebreaker rule, where a runner is placed on second to start the inning for both teams, but the inning starts with one out. Neither team scored in the 10th and the game ended in a tie, because games in the pod will not go past 10 innings.

In the second game, it was Washington that started the scoring. In the third, Patrick Causa led the frame off by walking and would score on a David Martinez double to right center. Martinez scored on a throwing error towards first by Andres Rios to make it 2-0 on the same play Joseph Fernando reached on an infield single. The scoring would halt until John Havird, who was great through five innings, walked home two runs in the sixth before Jake Dexter worked him out of a bases-loaded, no out jam.

Washington scored its third run on a single by Patrick Causa to take a 3-2 lead. Tommy Baggett singled home a run off Zach Strecker in the eighth to tie the game at 3 before Fernando's second infield single of the night brought home what turned out to be the game-winning run in the home half. Strecker got the win after a blown save by shutting things down in the ninth.

Tomorrow, the Slammin' Sammies play the Baseball Brilliance Sox at 1 p.m. and the Wild Things host the Road Warrior Black Sox at 5 p.m.