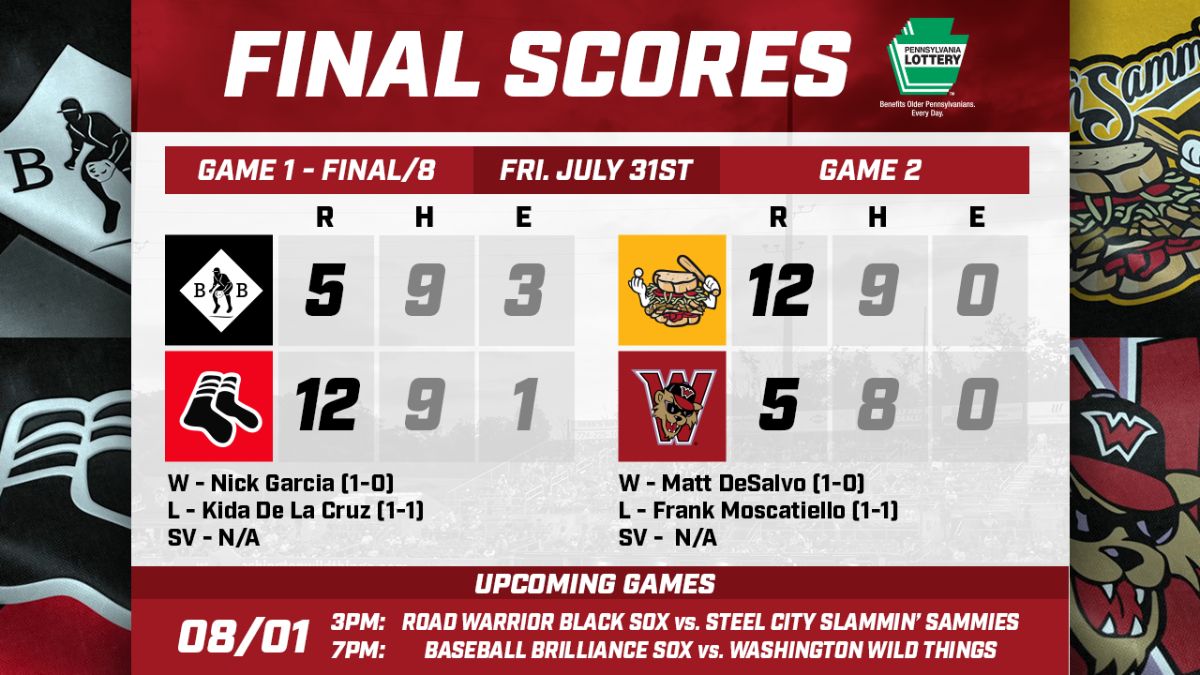 WASHINGTON, Pa. (July 31) - The Road Warrior Black Sox and the Steel City Slammin' Sammies won by 12-5 finals in the pod Friday night in Washington, Pennsylvania. The four teams combined for 34 runs and 35 hits on the day.

The Black Sox would plate five in the third. Bass singled in a run before Joe Torre did the same. Derek Reddy singled home two more and scored himself on an error on a failed pick off. The final three runs of the contest came in during the sixth. Nick Adgar plated a run with a single then Torre singled home two more.

Kida De La Cruz took the loss while Nick Garcia picked up the win after relieving an injured Andrew Cartier for the Black Sox.

In the second game, it was Steel City that started the scoring. In the second, Nick Ward led the inning off with a homer before Ryan Cox and Saige Jenco both singled. Thorburn knocked home both with a double and advanced to third himself on the throw home to try and get Jenco, who scored. Joe Campagna lifted a sac fly to plate Thorburn. In the home half, Josh Rehwaldt doubled home Hector Roa before he scored on a single by David Martinez.

The Wild Things added three in the third, the first two of which came in on Chris Kwitzer home run. Patrick Causa signled home Ray Hernandez, who had picked up his second hit of the night earlier in the frame, to make it 5-4 Washington. In the fourth, Steel City broke it open. Robbie Thorburn singled home the first of the six runs in the frame, before Liam Sabino hit a two-run single to center that made it 7-5. A double steal scored a run then Dom DeRenzo launched a homer to left to make it 10-5. The same wild pitch plated two more for the Slammin' Sammies in the fifth inning.

Frank Moscatiello took the loss after allowing eight runs in 3.1 innings. Matt DeSalvo picked up the win after his five innings of work.

The bullpens were impressive for both teams. For Steel City, Sean Kealey struck out seven in three innings of work. He walked two and didn't give up a hit or a run. James Meeker closed the game with two strikeouts in an inning. Malcolm Grady, Tyler Vogel, Lenny Gwizdala and Zach Strecker all worked scoreless outings for the Wild Things.

The Road Warriors and Slammin' Sammies will battle tomorrow at 3 p.m. and the Wild Things and Baseball Brilliance go at 7 p.m. View box scores below with the links and cumulative stats on the home page of the website.