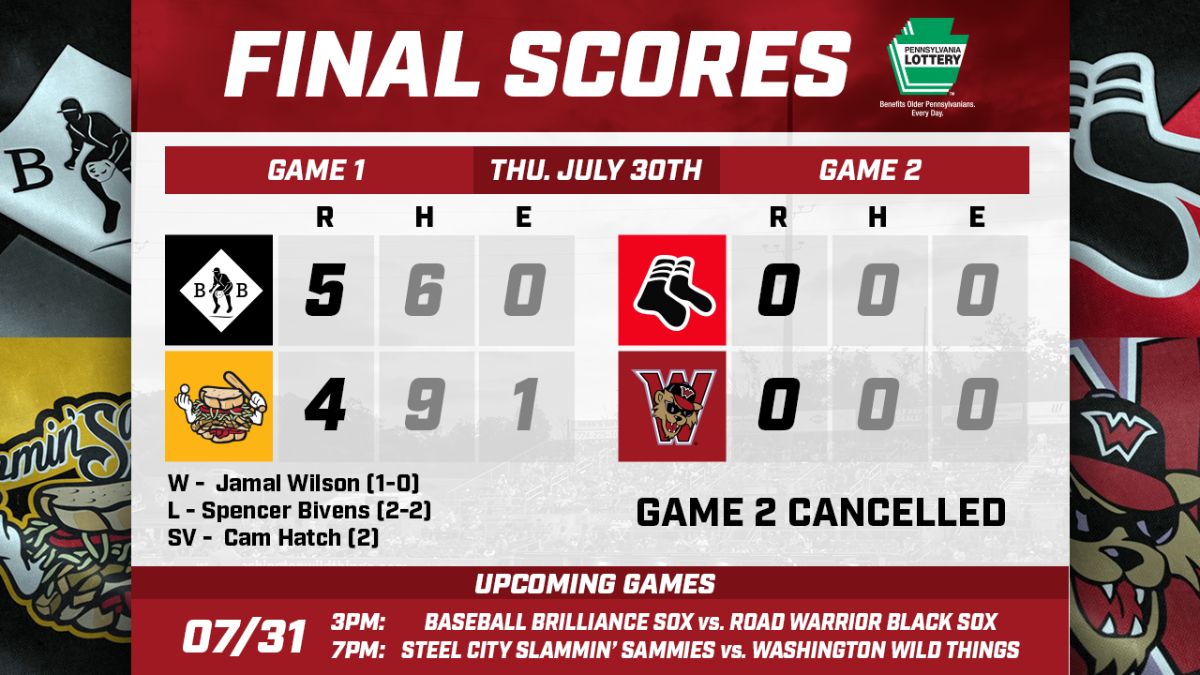 WASHINGTON, Pa. (July 30) - Baseball Brilliance used a three-run home run by Brandon Phillips in the first inning and eventually scored the difference-making run on an error, as the Sox won their fifth game in their last six, defeating Steel City to start the week, 5-4. The second game of the night, which would have featured the Wild Things and Road Warriors, was cancelled due to inclement weather in the area and projected weather coming towards Washington.

After two walks by Slammin' Sammies starter Spencer Bivens to start the first, former Reds' standout Brandon Phillips stepped in and hit an 0-1 pitch out of the park to make it 3-0 Sox. After another walk and a base hit, Cody Lovejoy bounced into a double play to plate Jacob Bockelie and make it 4-0.

Liam Sabino plated Joe Campagna with a sacrifice fly in the home first. Nick Ward hit an RBI single in the third before Dalton Combs plated another with a single. Later in the game, Baseball Brilliance scored on a throwing error before Russ Olive lifted a sac fly to plate the final run of the game, bringing the contest to its final of 5-4.

Bivens suffered the loss, falling to 2-2, despite throwing up five zeroes after the rough first inning. Jamal Wilson picked up the win, as he pitched three innings of one-run ball. Cam Hatch pitched two innings for his second save.

The night's second game was cancelled and will not be made up. A combination of inclement weather already in the Washington area and the future forecast for the rest of the night helped make the decision.

Tomorrow, the Road Warriors serve as the home team to the Baseball Brilliance Sox at 3 p.m. before the Wild Things host the Slammin' Sammies at 7 p.m. Tomorrow is Hockey Night at Wild Things Park, presented by Bordas and Bordas.