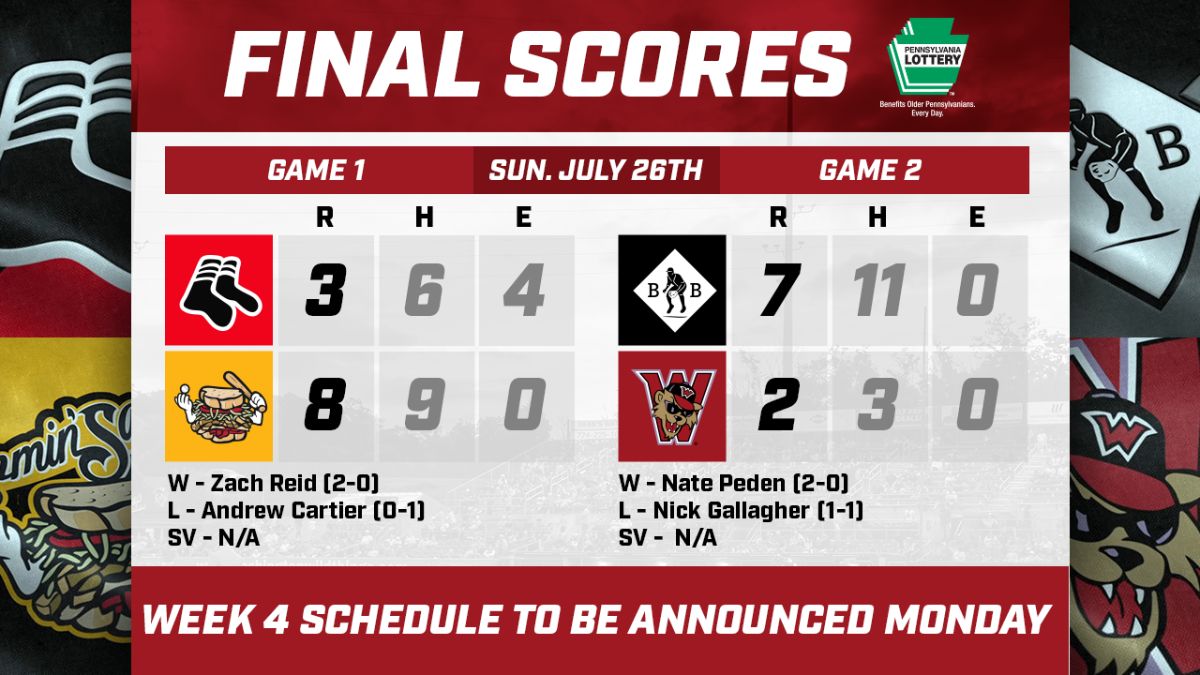 WASHINGTON, Pa. (July 26) - Sunday at Wild Things Park, Steel City scored eight unanswered to defeat the Road Warriors and that, coupled with the Washington loss to the Baseball Brilliance Sox in the second game of the day, allows the Slammin' Sammies to sit in first place alone in the pod at 8-4 at the end of the third week of play in Washington. In the Baseball Brilliance win, righty Nate Peden was excellent. He allowed just three hits and two runs over 8.1 innings.

The Road Warrior Black Sox jumped on Steel City starter Keven Pimentel to plate three in the first inning, but were shut down from there. In the inning, Drew Mount doubled home Derek Reddy, Zane Gelphman knocked home Mount and Nick Crouse singled home Gelphman. From there, the work of Pimentel, who ended up throwing four innings, Austin Kitchen, Logan Linder, Zach Reid, James Meeker and Jesus Balaguer shut down the Black Sox and allowed the Slammin' Sammies offense to score eight unanswered to win the game.

Russ Olive hit a sacrifice fly in the second inning before Dom DeRenzo's three-run home run gave Steel City the lead at 4-3 and for good in the fourth. Russ Olive batted a ball that he reached on via error and on the same play a run scored well ahead of the play, giving him his second RBI of the night in the sixth. Liam Sabino tripled home a pair in the seventh before a single by Nick Ward brought him in for the final run of the game.

Zach Reid, who was deemed the most effective reliever in the game where Pimentel didn't qualify for the win, got the win to move to 2-0. Andrew Cartier took the loss (0-1) after allowing four runs (three earned) in his four innings of work.

The scoring in the second game didn't open until the fifth inning, but it was a bit of an onslaught from there for the Sox. Brennan Price grounded out with the bases loaded to plate the game's first run. Then Josh Rehwaldt collected the first Wild Things' hit with a home run in the home half of the frame to tie the game.

In the sixth, Tommy Baggett, who was 5-for-5 on the day with two doubles and an RBI, singled home Jacob Bockelie, Danny Muller was hit by a pitch with the bases loaded to make it 3-1 and Price singled home two more to make it 5-1. Andres Rios lifted a sac fly and Price doubled home a run for his fourth RBI in the eighth. Price drove home four in total.

Through eight innings in his start, Peden threw 112 pitches and allowed just the Rehwaldt homer. He went out for the ninth, walked EP Reese and allowed back-to-back singles to Chris Kwitzer and Ray Hernandez. The Hernandez base hit brought home Reese. Cam Hatch finished the deal, which allowed Peden's final line to read 8.1 innings, three hits, three walks, a hit batter, eight strikeouts and two runs, both earned. He moved to 2-0. Nick Gallagher took the loss, falling to 1-1.

View box scores for the games below and cumulative stats for the year through three weeks under the stats tab on the Wild Things' website. Week four's schedule along with tickets going on sale will be announced Monday, July 27.