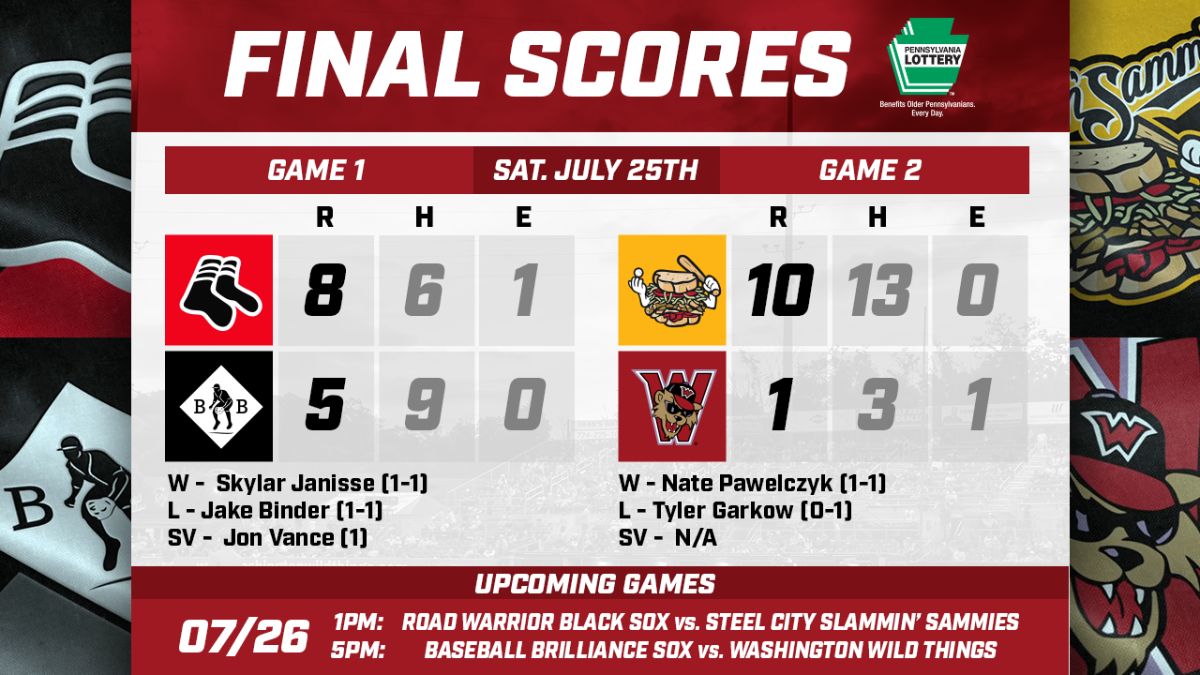 WASHINGTON, Pa. (July 25) - On Wrestling Night in Washington, PA, the Road Warrior Black Sox and Steel City Slammin' Sammies came away with wins in two different fashions. The Black Sox defeated Baseball Brilliance 8-5 despite the Sox bringing the tying run to the plate in the ninth. Then the Slammin' Sammies scored the first 10 runs of the second game before winning by a final of 10-1.

The Black Sox answered as Carson McCurdy hit a grand slam in the third inning plating Nick Crouse, Joe Torre and Drew Mount. Derek Reddy knocked home two more in the fourth inning before Andres Rios' solo shot for Baseball Brilliance brought the score to 6-4. The Road Warriors' final two runs came in the sixth on a wild pitch and a bases-loaded walk. The Sox got another RBI from Rios on a base hit scoring Demko in the bottom half of the same ining.

The Sox brought the tying run to the plate in the ninth inning before the game ended as Jonathan Vance used just one pitch to get a one-out save, his first of the season. Skylar Janisse took the win, moving to 1-1, after 5.2 innings of five-run (three earned) ball. Jake Binder fell to 1-1 after allowing six earned over 4.1 innings of work.

In the second game, Steel City opened the scoring, in fact, the Slammin' Sammies scored the first 10 runs of the game. In the third, John Sansone plated Jason Shirley, who had tripled to start the inning, to make it 1-0. Joe Campagna then scored on a book-rule double by Dalton Combs. They'd score five more in the fifth inning. Sansone hit a book-rule double of his own to plate Robbie Thorburn, Combs lifted a sac fly to score Campagna, Nick Ward doubled to plate Sansone and Lucas Herbert demolished a baseball to left field for a two-run homer.

Herbert singled home two more with another bullet knock in the sixth as Campagna and Sansone. Ward singled home Thorburn before Campagna was thrown out trying to score by Hector Roa on the same play. Cody Erickson knocked home Roa in the bottom of the seventh for the only Wild Things' run of the contest, which ended 10-1.

Tyler Garkow took the loss to fall to 0-1, as he allowed six runs over 4.2 innings. Nate Pawelczyk got the win after he worked seven innings of one-run ball, allowing three hits and walking four. Pawelczyk fanned 10 in his first win of the summer.

Tomorrow, the Road Warriors take on Steel City at 1 p.m. and the Wild Things host Baseball Brilliance at 5 p.m. on a Kids Eat Free Sunday presented by PA Cyber at Wild Things Park. It's also Christmas in July. Kids 12 years of age and under get in and eat for free tomorrow. You can get tickets at the link emailed to all registered kids-membership members or by calling the box office at 724-250-9555.