Opening Weekend is ONE WEEK AWAY! 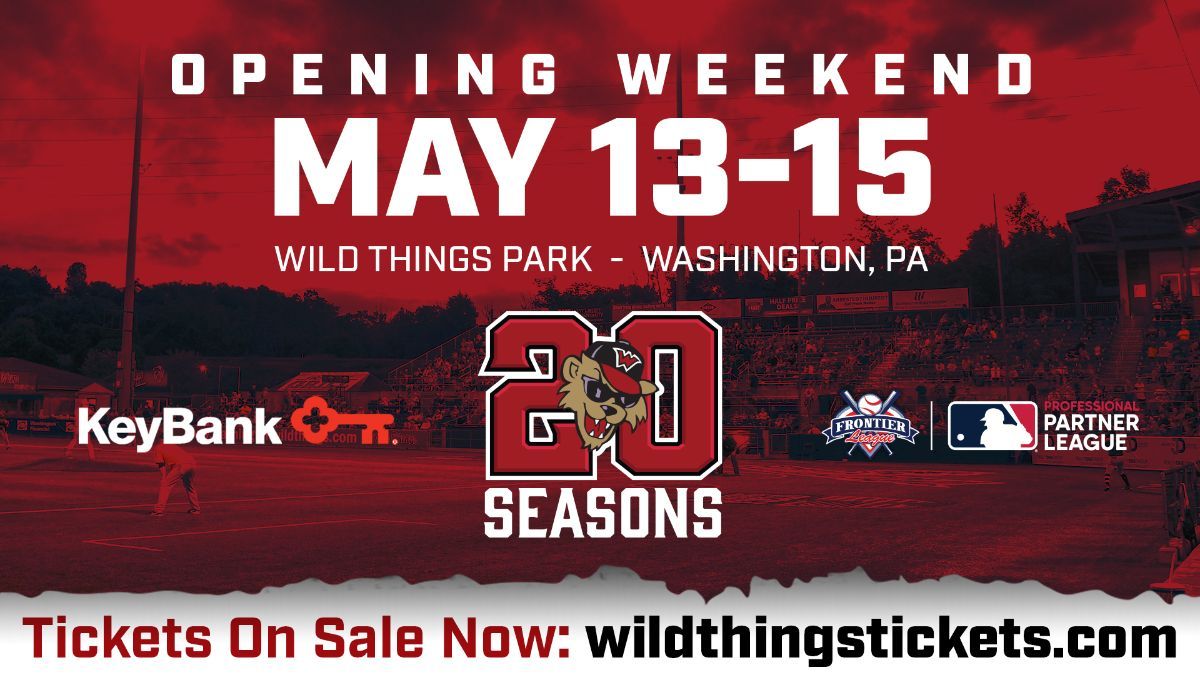 Friday is Opening Night with first pitch scheduled for 7:05 p.m. Gates will open at 6 p.m. The celebration kicks off with a pre-game ceremony at 6:30 p.m. on the field at Wild Things Park as the organization will welcome back some of the dignitaries and executives that were on the field on Opening Night of the 2002 season for the Wild Things. Former Director of Baseball Operations and Pittsburgh Pirates’ pitcher Kent Tekulve will be in attendance for the ceremony and night.

The Wild Things will be making a toast with non-alcoholic champagne to the 20th Anniversary of the team’s tenure in the Frontier League and the future before the game as well. The Wild Things will also be wearing throwback jerseys, presented by the Washington County Community Foundation; jerseys that will be auctioned off to fans through [email protected], the team’s auction partner.

After the game, a fireworks show will light up the Washington sky.

On Saturday, the first 1,000 fans will receive the first installment of the five-part 20th Anniversary Poster Series, presented by Key Bank with gates scheduled to open at 6 p.m. On top of being here Friday as well, select Wild Things’ alumni, which will be advertised later, will be in attendance to sign autographs and interact with fans.

Sunday, the team will celebrate Wild Thing’s birthday with Mascot-A-Palooza, presented by Point Park University, on a Kids Eat Free Sunday, presented by PA Virtual Charter School. Kids 12 and under receive a free ticket and meal upon registration to the Wild Things’ kids’ membership program, which stands for all Sunday home games again this season. Area mascots will be in attendance to help celebrate Washington’s beloved mascot, Wild Thing. The first 250 kids also will receive an autograph book, compliments of Point Park University, upon entry. Sunday’s game is slated for 5:35 p.m. with gates set to open at 4:30 p.m.

The weekend kicks off a season-long party at Wild Things Park and celebration of the momentous anniversary that few teams have reached in the history of the Frontier League, which is the longest-running independent baseball league in the country and a partner league of Major League Baseball.

“We anticipate some fantastic crowds on Opening Weekend as we celebrate our 20th summer of baseball,” said president and general manager Tony Buccilli. “Our organization is very proud of the millions of fans we have been able to impact over two decades and the memories we have been able to create. Community, family and a passion for winning will continue to be the pillars for our next 20 years.”

Throughout the weekend while supplies last, fans will receive a 2022 magnet schedule as well, which is just another present to the fans for their past and continued support during the organization’s first 20 seasons and beyond.

The Wild Things are also eager to invite all former players, field staff and employees back for the weekend. Those who have worked for the organization in any capacity will receive complimentary tickets to come to the games all weekend if they wish. Past staff can register for the weekend by clicking here.

Tickets are on sale now for the weekend at wildthingstickets.com, and tickets are $15 to sit anywhere in the seating bowl. Group, kids, military and senior discounts are available as well by calling 724-250-9555 or by visiting the box office at Wild Things Park.

Kick off the summer-long party with us by securing your seats to Opening Weekend, presented by Key Bank, now!