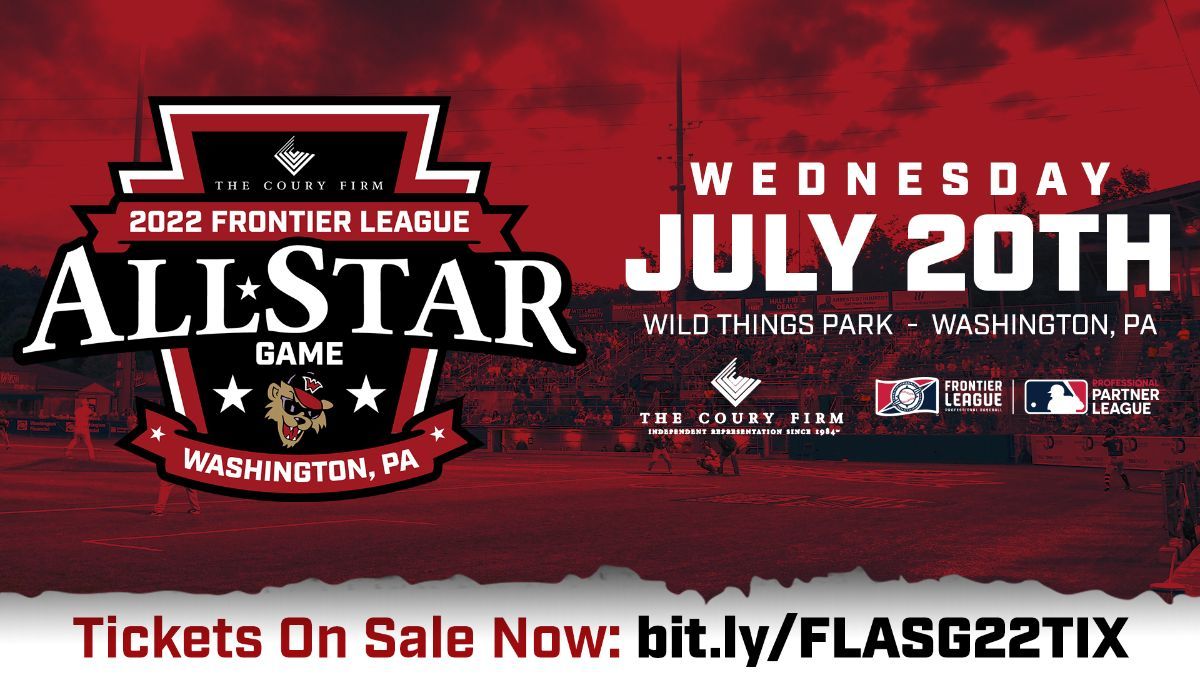 “The Washington Wild Things are planning a truly unprecedented minor-league baseball All-Star Game and related set of festivities for the Washington, Pennsylvania, region” said Frontier League Chief Executive Officer Jon Danos. “We view the events as a special community celebration of the long history of the Wild Things, their fans, sponsors and supporters, as well as an opportunity for the team and the Frontier League to express gratitude and excitement for our players and our future.”

“We are honored that the league selected Washington as the site for the 2022 Frontier League All-Star Game,” said Wild Things’ team owner Francine Williams. “This will be the first All-Star Game since the merger of the Can-Am League and the Frontier League, and we are planning a full five days of activity!”

The celebration continues Sunday, July 17, when IWC Wrestling brings Wrestling at the Ballpark to Wild Things Park. Tuesday, July 19, the Eli Young Band and Lakeview will be in concert, presented by Drusky Entertainment. Tickets for that concert are available now here.

Wednesday, July 20, the biggest stars of the Frontier League will compete in the 2022 Frontier League All-Star Game. The stars of the West Division, which is made up by the Evansville Otters, Florence Y’alls, Gateway Grizzlies, Joliet Slammers, Lake Erie Crushers, Schaumburg Boomers, Windy City ThunderBolts and the Wild Things, will battle the stars of the East Division, made up by the Empire State Greys, New Jersey Jackals, New York Boulders, Ottawa Titans, Québec Capitales, Sussex County Miners, Tri-City ValleyCats and the Trois-Rivières Aigles. Gates will open at 6 p.m. with first pitch scheduled for 7:05 p.m.

“The Coury Firm is excited to support such a great week of events for the Frontier League. Building off the success of last year’s charity softball game, we believe this year’s lineup of events creates enthusiasm and brings the local community together,” said The Coury Firm CEO Gregg Coury. “More importantly, this creates an ability to bring awareness and support to local charities that make a profound impact on our local communities.”

During the game, the Frontier League all-stars will don the jerseys of Negro League teams from their team’s regions as part of a celebration of the 50th Anniversary of Josh Gibson’s induction into the baseball Hall of Fame. The jerseys will be auctioned off during the game on the Wild Things’ auction partner [email protected]’s platform so that fans from all over the league can bid on and try to win their piece of history with proceeds benefitting the Josh Gibson Foundation.

Tickets for the All-Star Game are available now at bit.ly/FLASG22TIX. It will cost $10 to sit in the lower seating bowl of Wild Things Park and $5 for tickets in the bleacher sections (the 200 level) of the stadium. More information is available at washingtonwildthings.com as well as frontierleague.com.

The Wild Things’ organization and Wild Things Park has been selected as the host of the 2022 Frontier League All-Star Game. The festivities will begin Saturday, July 16 with the Three Rivers Celebrity Softball Game presented by The Coury Firm and continue Sunday with IWC Wrestling at the Ballpark. Tuesday, Eli Young Band and Lakeview will be in concert, presented by Drusky Entertainment and Wednesday, the Frontier League stars align with the league’s All-Star Game, presented by The Coury Firm. Tickets are available here. More information can be found at washingtonwildthings.com as well.