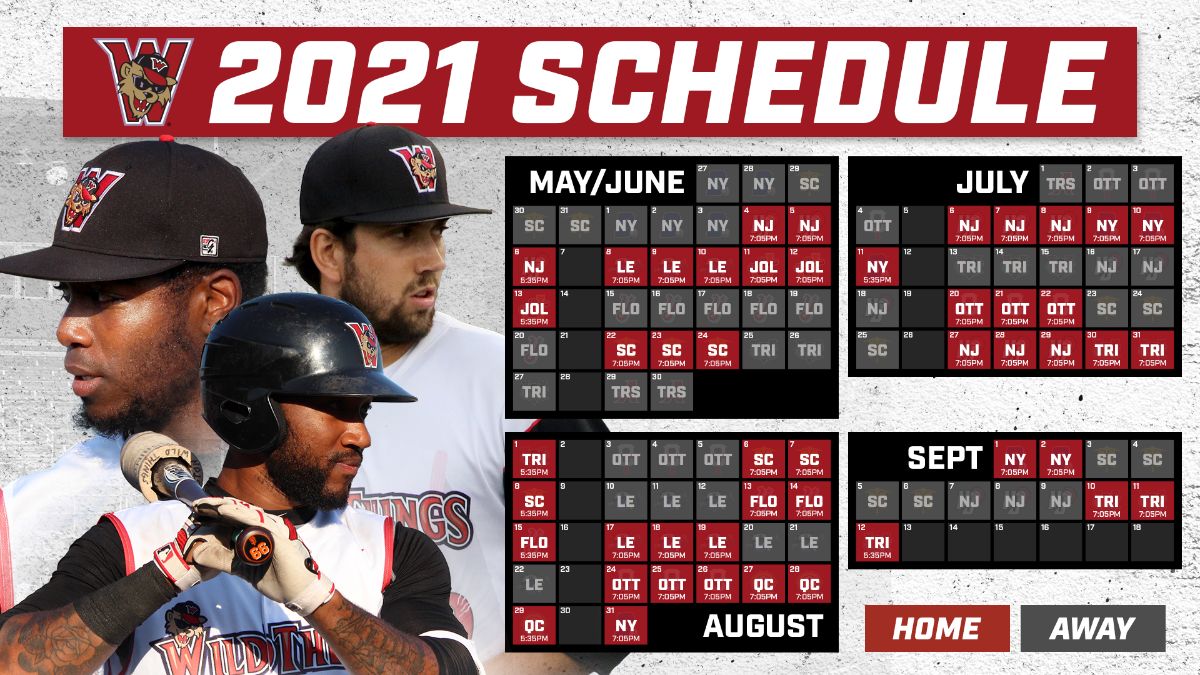 WASHINGTON, Pa. (Feb. 17) - The Frontier League, a partner league of Major League Baseball, and its 16 member teams have announced the schedule for the upcoming 2021 season. The league, which is the longest-running independent baseball league in the country, is scheduled to begin its 28th championship season Thursday, May 27 and conclude the 96-game marathon Sunday, September 12. The Wild Things and the other 15 teams will each play 48 home and away games. You can find the full Wild Things' printable schedule here.
The Frontier League will be comprised of two conferences broken down into four total divisions for standings and travel purposes in 2021. The Can-Am Conference will be split into the Atlantic Division and Northeast Division. The Atlantic will be comprised of Quebec, Trois-Rivières, Tri-City and New York. The Wild Things will be joined by Ottawa, Sussex County and New Jersey in the Northeast. Gateway, Florence, Evansville and Southern Illinois make up the West Division of the Midwestern Conference while Lake Erie, Joliet, Schaumburg and Windy City will play in the Central Division in the Midwestern Conference.
For the playoffs, the league will take the four division winners to a four-team playoff.
The Wild Things will kick their 19th Frontier League season off with a seven-game road trip that starts May 27 with a two-game set against the New York Boulders. The team will then travel to Sussex County to play the Miners in a three-game wrap-around series that runs through Memorial Day before playing three to start June against the New York Boulders to close the trip. The trip will cover five of the 11 meetings between the Wild Things and Boulders in 2021, while the three-game set against the Miners takes care of three of 16 matchups between Washington and Sussex County. That is the most amount of games against an opponent on the schedule.
The home opener is slated for Friday, June 4 against the New Jersey Jackals. It's set to start a nine-game homestand that will also see the 2019 East Division Champion Lake Erie Crushers and 2018 Frontier League Champion Joliet Slammers visit Wild Things Park.
In total, Washington will play the Jackals 15 times, Lake Erie, Tri-City and Ottawa 12 times, Florence nine times, including a six-game, two-series road trip to the Yalls from June 15-20 and three against Joliet, Trois-Rivières and Quebec. The Wild Things will not play Gateway, Evansville, Southern Illinois, Schaumburg or Windy City during the regular season this year.
Highlights of the home slate include the initial nine-game homestand, eight weekend series and two total nine-game homestands. The final home series of the regular season will be played Friday, September 10 through Sunday, September 12. Home game times will be as follows: 7:05 p.m. for all Tuesday-Saturday games and 5:35 p.m. on Sundays. As of now, there are no day games scheduled and no doubleheaders on the home slate.
The Frontier League will not have a mid-season All Star Game or break in 2021. Find the full league schedule on the Frontier League's website, frontierleague.com.
Season ticket packages are on sale now on the Wild Things online team store or by calling the box office at 724-250-9555. All plans must be paid in full by April 1 and start as low as $80. For more information regarding plan options and benefits, click here.
PROUD SPONSORS OF THE WILD THINGS