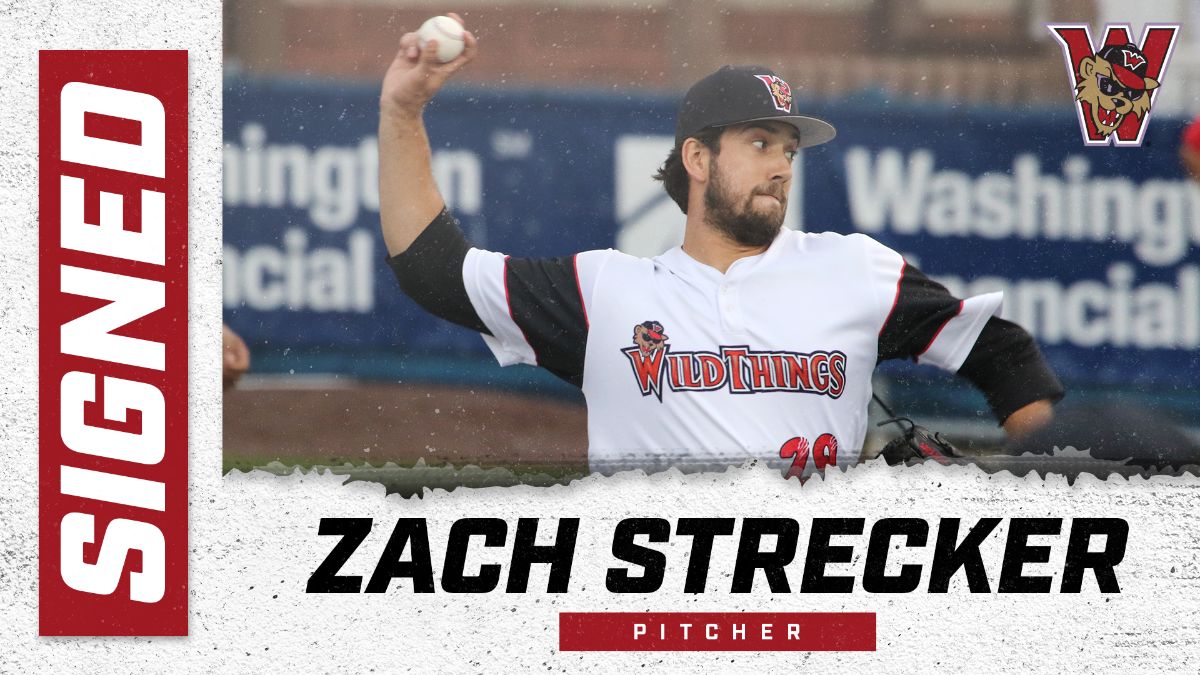 WASHINGTON, Pa. (February 2) - The roster for the 2021 Washington Wild Things has grown by one, as the team announced today that the franchise's all-time leader in saves Zach Strecker has resigned. Strecker will be back for a fourth Frontier League season and fifth overall with the club, including a strong 2020 in pod play that followed Strecker setting the single-season ERA record for Washington in 2019.
The former Kentucky Wildcat allowed just two runs (one earned) in 11.2 innings of work this past summer, appearing in 11 games. He fanned 13 batters and allowed only eight hits and did not walk a batter.
He finished the 2019 season with 11 saves, the first of which gave him the team's career record. The last was his 52nd, which places him sixth on the Frontier League's charts, just two behind Jorge Marban's 54 (Florence, 2012-14) for fifth. With eight saves, he'd be second. The all-time record belongs to Eric Massingham (Evansville, 2011-14), who had 70 career saves.
"We are very fortunate to have Strecker back for the 2021 campaign. His consistent dominance puts him in rare company, among the best relievers to ever to pitch in the Frontier League," said president and general manager Tony Buccilli. "The goal this season is clear and Strecker returns to make history."
For Strecker, returning was a "no brainer."
"2020 didn't count and I needed one more go around with Dem Thangz," said Strecker. "Plus Momma Streck said this is my last year so I have to take advantage of that."
In terms of what keeps him coming back, he said he didn't know where to begin.
"[There are] too many great things [that] come from being a Wild Thing: the teammates, atmosphere, winning... the people especially Tony Buccilli and Kyle Dawson," said Strecker. "Being able to be myself and be truly embraced by everyone [is great too], even while [I'm] being a clown."
He worked four strong seasons at Kentucky. Those saw him post a career 3.18 ERA in 81 games and 96.1 innings. A walk-on to the team before his freshman season out of Eastern High School (Louisville, Kentucky), Strecker enjoyed his best season as a senior, posting a 1.84 ERA in 22 games. He pitched 29.1 innings and allowed 25 hits, seven runs (six earned), walked six and fanned 20.
He'd pitch in the Twins' organization to start his pro career in 2016 before signing with Washington prior to the 2017 campaign.
In his first three Frontier League seasons with the Wild Things, Strecker was named a Frontier League All Star twice and boasted a 1.72 ERA in 178 innings pitched. He's walked only 50 and struck out 130. The 52 saves go along with 13 wins. His 1.48 ERA in 2018 finished just shy of the franchise's single-season record. He'd then set it in 2019 with a 1.29 ERA in his 44 games pitched. He accumulated 55.2 innings and allowed just eight earned runs in the Frontier League's last championship season.
Now Strecker returns for another season, in hopes of winning a title and continuing his success.
"Some personal goals this season are to help us win as many games as I possibly can. I want zero blown saves, to break more records... you name it," said Strecker. "As a team anything short of a championship will be a disappointment. [I'd love to have the] regular season best record, sweep playoff series and have the 2021 Thangz be the Frontier League Champs."
Tom Vaeth's first roster will continue to take shape in the next few weeks before the Wild Things report for Spring Training around May.
PROUD SPONSORS OF THE WILD THINGS